[SOLVED] Using an in-memory repository. Keys will not be persisted to storage. – ASP.NET Core under IIS

One of the main benefits of building a new .NET project using .NET Core is cross platform deployment, however, IIS will still be a common home for ASP.NET Core web applications.

In netcore 2.0 MVC applications, a transparent feature that is configured during app Startup is Data Protection. Data Protection provides a cryptographic foundation for things like ASP.NET Identity among many others.

When the Data Protection system is initialized, it applies default settings based on the operational environment. These settings are generally appropriate for apps running on a single machine.  – Rick Anderson

The app attempts to detect its operational environment and handle key configuration on its own. (cite)

For IIS, the item we’re interested in here is #3. The default configuration will store the keys in the system registry, that way the keys persist between AppPool restarts and machine restarts. It also lets you share the same key between applications if necessary (via a configuration addition to Startup.cs).

Once you deploy your app and run it under an IIS App Pool, you may find that the Data Protection keys are not being persisted. If you have error logging you’ll see entries like this:

This means that each time your app pool restarts, new keys will be generated and any encrypted codes or values which have been stored or transmitted will no longer be usable. A basic example of this is a Forgotten Password request using ASP.NET Core Identity. If you request a password reset email, an encrypted URL will be sent in the email for you to click on. If the app pool restarts before you get around to clicking that link, the token will not be able to be decrypted and the reset will fail. This scenario becomes much worse if you’re storing long term encrypted data for later decryption.

So what is happening? Why is the default storage method of the system registry failing?

This issue stems from a bug in IIS itself which may or may not ever be corrected. In order to work around the issue, it’s necessary for you to edit your App Pool to enable User Profile Loading. Once you set your App Pool to load the user profile for the application pool identity, the application will have permission to read and write to the system registry as intended. 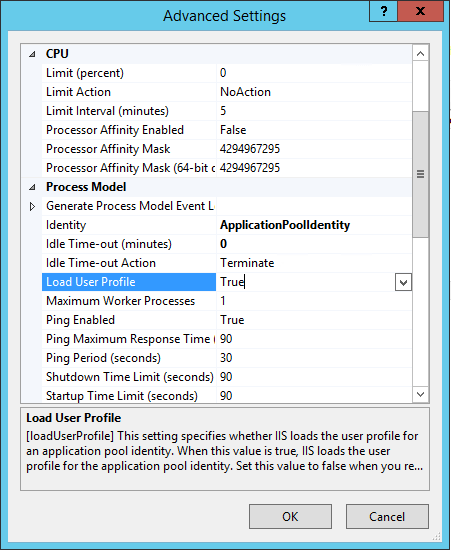 Alternatively, you can configure Data Protection to use a different method of key storage, like a UNC share.

Thanks no much. Your fix worked perfectly.

Thanks so much for the explanation…I was thinking it is a bug in my code.As for me,i encrypt and save keys for decrypting to database or encrypt them in a text file.I will work around your fix cause i hate seeing those warning in my logs folder

With more than 30 years of experience  in the business (and...