By Cypress North
No Comments

Happy New Year from Cypress North! 2013 was a big year for us: we moved, re-branded, and expanded. So what better way to celebrate the old and ring in the new than recapping the last 365 days? Here’s a look at some of our achievements and adventures this year (aside from the awesome work that we’ve done for our clients).

On Dec. 11 2012, we officially moved in to our new office digs in the Larkin District. Even though the move technically happened in 2012, 2013 marks our first full year in the new office, and the start of a more collaborative environment for our team. We escaped the corporate blue patterned carpet and tan cubical walls and entered a world of beautifully-stained hardwood floors, exposed brick and beams, and an open floor plan — allowing us to talk out loud, bounce ideas off one another more freely, and . . . share ottomans with our desk mates.

The new office is within walking distance to the Larkin Building & Larkin Square, a frequent stop for many of the food trucks around Buffalo. We love being in this neighborhood because, not only do we get our daily dose of vitamin D, there’s always a nice selection of lunch options to pick from just down the street. 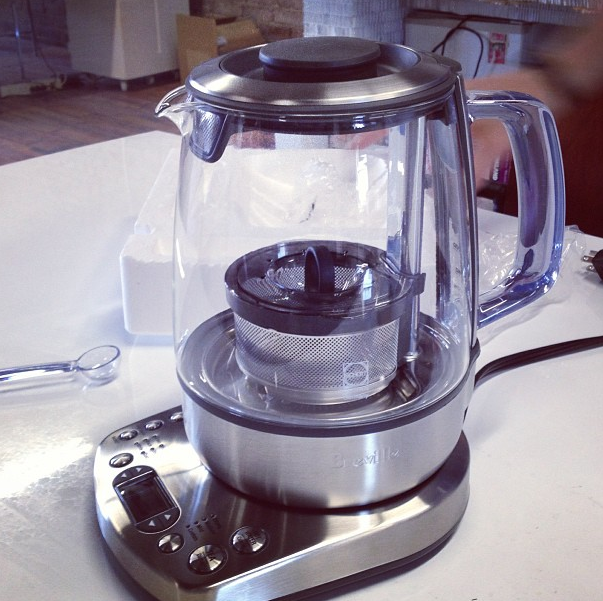 If you follow Cypress North on any of our social accounts, you know how much this office is obsessed with tea. We frequently purchase special-tea blends online and it’s always exciting when new flavors arrive. This tea maker automatically removes the tea leaves from the water as soon as it has reached the optimal steep time duration — resulting in a perfect cup every time. Thank you, Greg, for purchasing this incredible appliance.

This video made the term “cold pop” as much of a household name as Bubba Gump Shrimp. So what happened when the Cypress North team discovered flavored, carbonated water in a can? Well, we could only think of one name for it – COLD POP. And as much as we love tea, we’re also nuts for the simple joy of bubbly water. Healthy, hydrating, and available in a variety of delicious flavors. There’s always at least one 12-pack in our fridge, and to say that isn’t enough to last us a single day is hardly an exaggeration.

Jess joined the team in early 2013 and we love having her on board. You might know her as the content marketing queen that compiles our in-depth monthly content marketing ideas posts. In addition to being a talented internet marketer, JBudde exudes Lewiston pride, has extensive knowledge of craft hard cider and beer, and also possesses incredible facial recognition skills, as evidenced by the following:

You can see why we like having her around! She makes us laugh every day. (If you’re not sure which guy is J2… he’s the one on the left).

Most of our team consumes a cup (or two or three) of black coffee every morning, so it’s hard to remember office life before the Keurig. This beautiful machine has made a serious impact on most of the Cypress North team… making coffee so easy and convenient to consume that several of us began drinking more than we probably should have. So while 2013 was the year we started drinking more coffee, it’s also the year when we began what we’re calling The Caffeine Reduction. Basically, it’s a “diet” for coffee drinkers; limiting ourselves to roughly 2 caffeinated beverages per day (we used to average about 5). Not only are we sleeping better at night, but it makes our now-rare trips to the Keurig machine all the more enjoyable. Moderation breeds satisfaction.

This year we refreshed the Cypress North logo thanks to J2’s friend and graphic designer, Matt Seifert. We were looking for a logo that was fresh/modern, incorporated our new office color scheme, and that could be easily used/recognized across our social presences on the web. Matt used a cypress leaf/tree shape and arranged it in way that the “veins” of the leaf resembled an arrow pointing north. Pretty fantastic, if you ask us. We love it.

Along with our new logo, we upgraded our website and launched CypressNorth.com v3.0.

We quickly outgrew our 2010 website and needed a better way to:

Additionally, we wanted our website to be responsive and mobile-friendly, allowing visitors to cruise the site and read our blog with ease from any device. 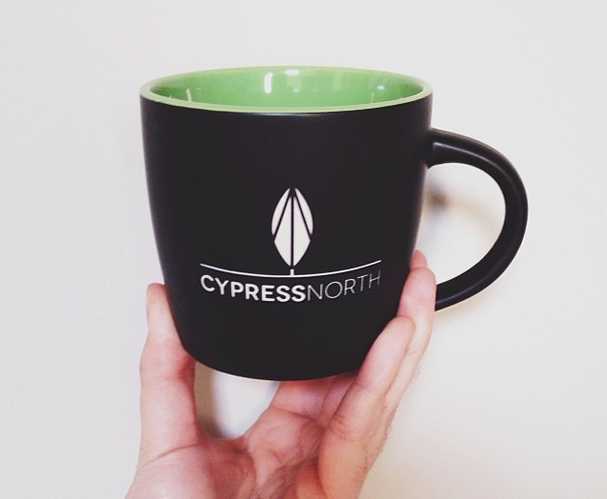 New logo? New website. New coffee mugs! We’ve always wanted to customize these black matte coffee mugs by deep etching our logo on it for some time now, but our old logo was very pixelated and was not a good candidate for this deep etch engrave technique. Once the new site launched, our clients and friends at CustomZilla dropped by to visit and surprised us with brand new coffee mugs beautifully etched with our beautiful logo. We use them daily!

The foosball table came out of hiding when we moved to the new office, which we’re thankful for because sometimes you just need to take a break from coding for hours or writing unique title tags and meta descriptions for hundreds of pages and engage in a foosball match! Foosball in the Cypress North office is played in teams (usually marketing vs. development) and with three balls at once, so games tend to get pretty heated (and loud!). There’s also a championship belt. Can you guess which team holds the title?

We got our hands (and faces) on a pair of Google Glass. Check out Greg’s post for some sweet visuals and an argument for the validity of Google+ in a Glass-ified world. 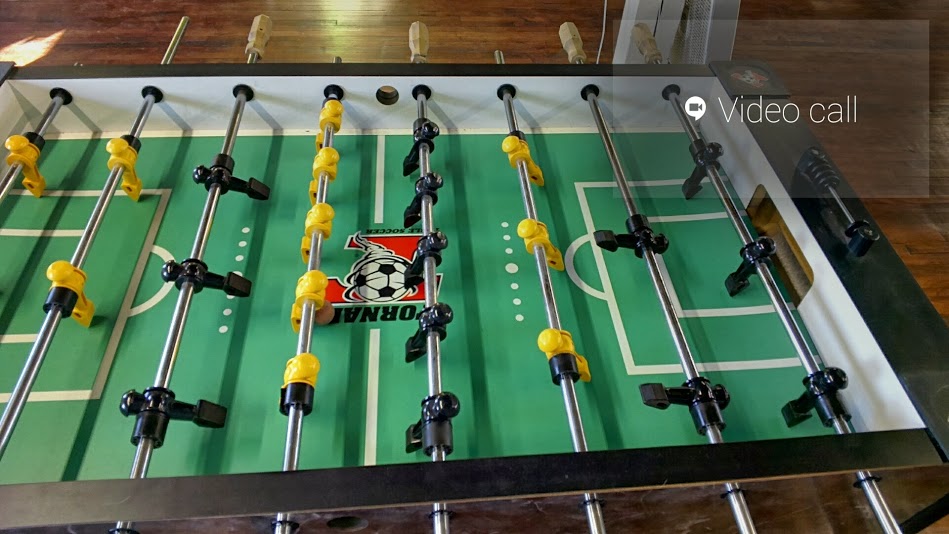 11. Named a Top PPC Expert in the World

We know he’s good, our clients know he’s good, and now the whole world knows he’s good. Our very own Greg Finn was named one of the top 25 most influential PPC experts this year by PPC Hero!

One of our own products, Smart Sign Out, was among the top finalists in Phase I of the Allscripts Open App Challenge. We didn’t take home the grand prize, but are still honored to be part of the innovative group of companies working to improve health care outcomes.

13. Built Our Own Data Center

Our IT department took a big leap server technology-wise by moving away from a leased hosting provider and migrating into our own data center in Buffalo. Our team hand built each of our new servers and the network infrastructure which were installed in our data center and brought online in May 2013. 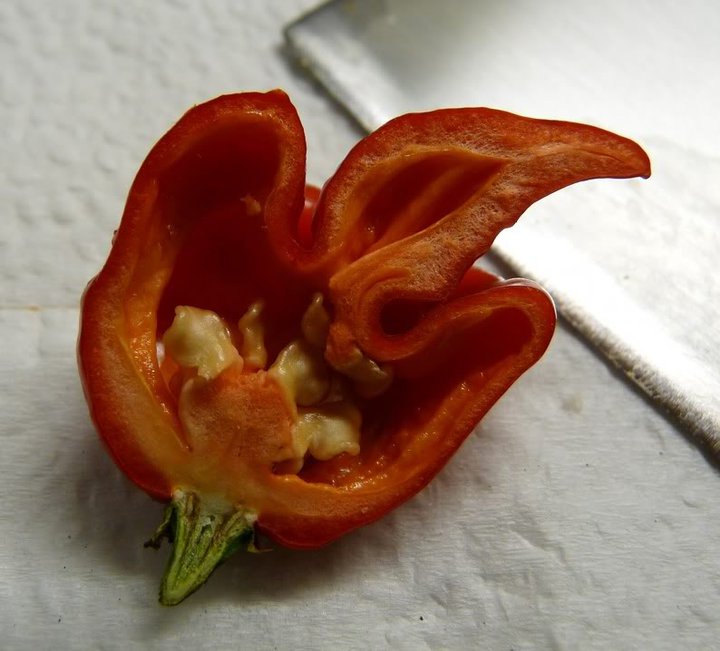 This Fall, J2 acquired a scorpion pepper, which (if you didn’t know) is hotter than a ghost pepper. We’re fans of all things spicy and dangerous, so we rose to the challenge. At first, we each just sampled a small piece of the “meat.” It was hot, no doubt. But we weren’t satisfied. Not wanting the opportunity to defeat the spiciest pepper known to man (or at least known to us) to pass us by, we kicked it up a notch and sampled the seeds. Then came the tears, the running noses, the coughs, and the mad rush to the fridge for some milk. But we prevailed; going back for seconds, and yes, even thirds. October 16th 2013 will go down in history as the day Cypress North did battle with a scorpion… and won.

Since moving into our new office, the door has gone through quite a transformation. First, we painted it black (it was a scuffed-up silver/basic metal door before) and put our suite number up next to it. It was a major improvement and looked really sharp, but something was missing – our logo! So we put it up; letting the world know exactly who is behind the best looking door in the building.

16. One Year of Weekly Blogging

We set a goal for the office last year that we would write one blog post per week for an entire year. Here we are, 47 weeks later, and we have yet to break the chain! We’ve seen a 351.02% increase in organic visits to the site and more great customer leads since we started blogging regularly.

It’s been quite an eventful year, and we’re proud of the work we’ve done. But it’s a new year now and there’s much to look forward to in 2014. You can keep tabs on it all by following us on Twitter, Instagram, Facebook & Google+. 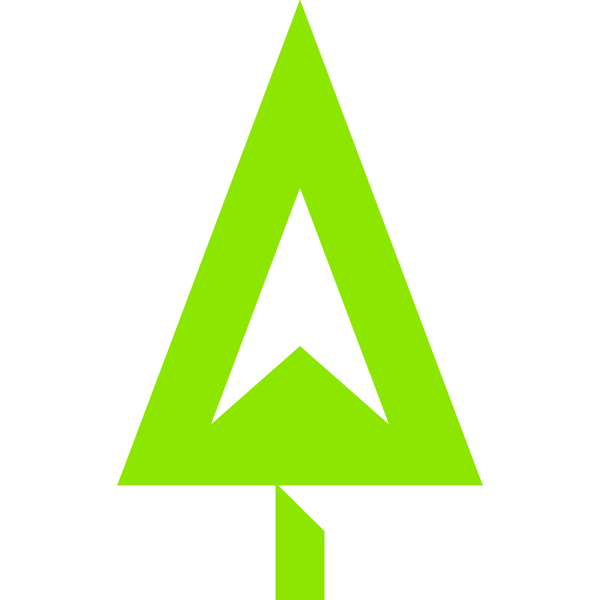 May has flown by here at Cypress North, full of new hires,...

Cypress North: The Story Behind Our Name

We are often asked why we named our company “Cypress...

How Agencies Can Succeed in Uncertain...

On Friday's episode of Marketing O'Clock I tried to give...